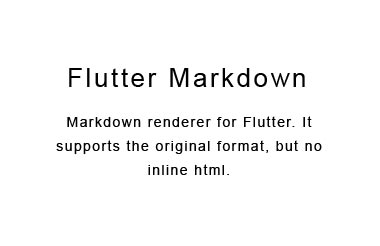 A markdown renderer for Flutter. It supports the
original format, but no inline
html.

Using the Markdown widget is simple, just pass in the source markdown as a
string:

If you do not want the padding or scrolling behavior, use the MarkdownBody
instead:

By default, Markdown uses the formatting from the current material design theme,
but it's possible to create your own custom styling. Use the MarkdownStyle class
to pass in your own style. If you don't want to use Markdown outside of material
design, use the MarkdownRaw class.

A Flutter based code editor.

Zefyr is currently in early preview. If you have a feature request or found a bug, please file it at the issue tracker.