This Flutter plugin lets you set up sampler instruments and create multi-track sequences of notes that play on those instruments. You can specify a loop range for a sequence and schedule volume automations.

It uses the core sampler engine from AudioKit on both Android and iOS, which lets you create an instrument by loading some samples and specifying what notes they are. If you play a note you don't have a sample for, it will pitch shift your other samples to fill in the gaps. It also supports playing SF2 (SoundFont) files on both platforms, and on iOS, you can load any AudioUnit instrument.

The example app is a drum machine. In theory, though, you could make a whole sample-based DAW with this plugin. You could also use it for game sound effects, or even to generate a dynamic game soundtrack. 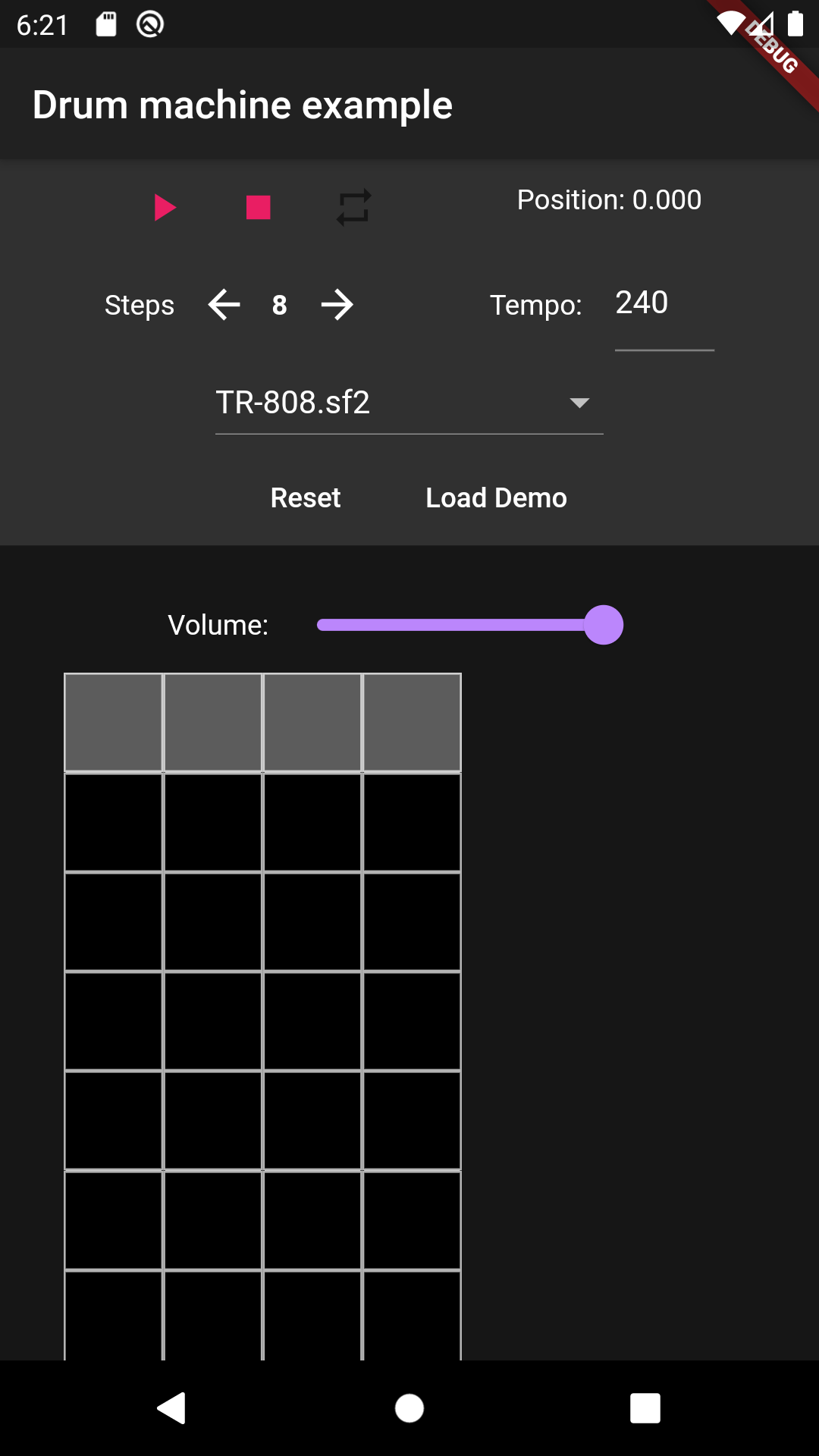 You need to set the tempo and the end beat when you create the sequence.

An instrument can be used to create one or more tracks.
There are four instruments:

For an SF2 or SFZ instrument, pass isAsset: true to load a path in the Flutter assets directory.
You should use assets for "factory preset" sounds. To load user-provided or downloaded sounds
from the filesystem, pass isAsset: false.

This will keep the audio engine running even when all sequences are paused. Set this to true if you
need to trigger sounds when the sequence is paused. Don't do it otherwise, since it will increase
energy usage.

createTracks returns Future<List<Track>>. You probably want to store the value it completes with in
your widget's state.

Schedule events on the tracks

This will add middle C (MIDI note number 60) to the sequence, starting from beat 0, and stopping
after 2 beats.

Start, pause, or stop the sequence.

Set the playback position in the sequence, in beats.

Set the length of the sequence in beats.

Set the tempo in beats per minute.

Get real-time information about the sequence

You can use SingleTickerProviderStateMixin to make these calls on every frame.

Gets the playback position of the sequence, in beats.

Gets whether or not the sequence is playing. It may have stopped if it reached the end.

Gets the volume of a track. A VolumeEvent may have changed it during playback.

Send a MIDI Note On message to the track immediately.

Send a MIDI Note Off message to the track immediately.

Change the track's volume immediately. Note that this is linear gain, not logarithmic.

The Android and iOS backends start their respective audio engines. The iOS one adds an AudioUnit
for each track to an AVAudioEngine and connects it to a Mixer AudioUnit. The Android one has to
do all of the rendering manually. Both of them share a "BaseScheduler", which can be found under the
ios directory.

The backend has no concept of the sequence, the position in a sequence, the loop state, or even time
as measured in seconds or beats. It just maintains a map of tracks, and it triggers events on those
tracks when the appropriate number of frames have been rendered by the audio engine. The
BaseScheduler has a Buffer for each track that holds its scheduled events. The Buffer is supposed to
be thread-safe for one reader and one writer and real-time safe (i.e. it will not allocate memory,
so it can be used on the audio render thread.)

The Sequence lives on the Dart front end. A Sequence has Tracks. Each Track is backed by a Buffer on
the backend. When you add a note or a volume change to the track, it schedules an event on the
Buffer at the appropriate frame, based on the tempo and sample rate.

The buffer might not be big enough to hold all the events. Also, when looping is enabled, events
will occur indefinitely, so the buffer will never be big enough. To deal with this, the frontend
will periodically "top off" each track's buffer.

Note that the Android build uses several third party libraries. The Gradle build will download them
from GitHub into the android/third_party directory.

The iOS build depends on the AudioKit library. It will be downloaded by CocoaPods.

To build the C++ tests on Mac OS, go into the cpp_test directory, and run

Then, to run the tests,

I haven't tried it on Windows or Linux, but it should work without too many changes.

PRs are welcome! If you use this plugin in your project, please consider contributing by fixing a
bug or by tackling one of these to-do items.