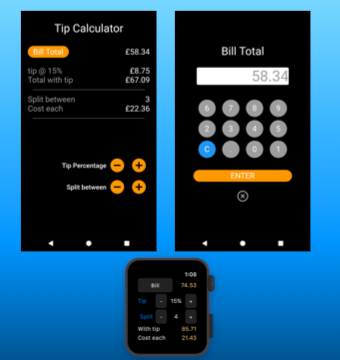 The Watch tips project has been updated again, The interface has been tidied up and a seperate value for the tip cost has been added and displayed ( a requested update). I have also added a custom 'keypad' rather than using the standard one available for the platform, hopefully the app now looks a bit better than it did - UX/UI design is not my strong point.

But the biggest update is that there is now also an Android version (without Watch support). Doing this has helped a lot as I can use the Flutter Android app for development purposes so that I now have Hot Reload back (development is good again ....)

For iOS, I still need to run/build (and fail) with the Flutter tools for iOS (this is required to generate the correct build scripts) and finish with XCode, but general dev is know easier.

This was an originally experiment to see if can use Flutter to build an iOS app with an accompanying watchOS app. My first attempts using the beta product were not successful so the idea was parked. Having now re-visited this I can now get a compiled blank watch app up and running with a Flutter app, so I will, in stages, try and re-create the WatchTips app using Flutter.

Ths app is a really simple app and originally just created as a proof point.

But for anyone interested here are the release links:

From the results of this test project, I have started developing a Flutter Package to allow communication between a Flutter iOS app and a watch app. This should allow easier integration with some standard functionality, though it is still a pain ATM as after you add a Watch Kit target to the iOS project as Flutter run/build no longer works. This means all package testing and development then needs to be done via XCode.

I have got messaging working from an iOS app to the watch via the plugin, this can be seen working in avideo here.

The only way, so far, I have found of creating a distro build is following this seqence.

BEFORE adding the Watch Kit app target set the final bundle ID, as the Watch app and associated extension needs to use the same prefix. If not you may need to update all references BEFORE creating the final Archive.

Change ALL the Version and Build values

This MUST be done for each target (in this case 3), change them to $(FLUTTER_BUILD_NAME) and $(FLUTTER_BUILD_NUMBER) respectively, otherwise although the test runs work, the Archive will not unless the version numbers match.

This will fail, but it generates the correct shell scripts to enable iOS to carry out the build (flutter build ios --release).

I have now managed to add the required code into the iOS project to allow it to communicate with Flutter and send data updates from the watch so they are reflected in the app.
Basically if you do a calculation for a Tip on the watch then the data is transferred to the associated device.

You need to forgive the (bad?) Objective C coding as it is not really my thing - who in their right mind thought of it in the first place anyway :-) . A lot of this was just brute force trial and error as well as a lot of searching and testing.

Apart from that the difficult issue for me was that although MethodChannel is quite well documented, EventChannel is not, the only examples I found were to do with Plugin extensions, but again probably due to my dislike (due to not understanding it very well) of Objective C.

I will try to create a generic plug-in later, but that will be done in Swift.

So after a bit of a hair pulling out session I have managed to get this working. I now have a iWatch app as well as a Flutter iOS app to build and run. I have tested this by building and distribuing to a physical phone via HockeyApp. Now the bad news......

I cannot use Flutter to either build the Flutter project or do the iOS release build, so I actually built the Flutter app in a seperate project then added the lib dir back into this one.
This is a major pain as to do an testing, on device or simulator I need to use XCode to do all the build (i.e. no hot-reloading), but it does work.

To create the AD-HOC distro of the app I again used XCode, set the target to Generic Device and Archived the project. The resulting AD-OC signed app works well.

But I think the last stage will be a major hurdle as I WILL need to do all building using XCode.........

After using XCode to define a simulator with an attached Watch Emulator the standard Vanilla app (from 1.0) was updated as follows

After this I can no longer user the IDE (VSC) to start the app up in debug mode as I get the following error ( perhaps some sort of cusom build configuration is required):

However, if I use XCode I can use XCode to compile the app and run the watch app on the emulator.

Prism is a beautiful open-source wallpapers app for Android. It is built with Dart on top of Google's Flutter Framework.

This App is complete example of how to create WhatsApp Sticker Application using Flutter.

An org-mode file viewer for iOS and Android.

GitJournal is a journaling app built with privacy and openness in mind. It stores all its notes in a standardized Markdown + YAML header format.

A command line utility and package for capturing screenshots for Flutter.