A lightweight, yet powerful way to bind your application state with your business logic.

As other state management pattern, binder aims to separate the application state from the business logic that updates it: 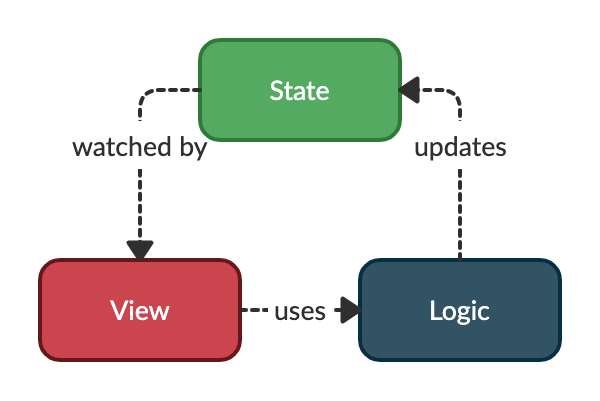 We can see the whole application state as the agglomeration of a multitude of tiny states. Each state being independent from each other.
A view can be interested in some particular states and has to use a logic component to update them.

In the pubspec.yaml of your flutter project, add the following dependency:

In your library add the following import:

Any state has to be declared through a StateRef with its initial value:

Note: A state should be immutable, so that the only way to update it, is through methods provided by this package.

Any logic component has to be declared through a LogicRef with a function that will be used to create it:

The scope argument can then be used by the logic to mutate the state and access other logic components.

Note: You can declare StateRef and LogicRef objects as public global variables if you want them to be accessible from other parts of your app.

If we want our CounterViewLogic to be able to increment our counter state, we might write something like this:

In order to bind all of this together in a Flutter app, we have to use a dedicated widget called BinderScope.
This widget is responsible for holding a part of the application state and for providing the logic components.
You will typically create this widget above the MaterialApp widget:

In any widget under the BinderScope, you can call extension methods on BuildContext to bind the view to the application state and to the business logic components:

This is all you need to know for a basic usage.

Note: The whole code for the above snippets is available in the [example][example_main] file.

A state can be of a simple type as an int or a String but it can also be more complex, such as the following:

Some views of an application are only interested in some parts of the global state. In these cases, it can be more efficient to select only the part of the state that is useful for these views.

For example, if we have an app bar title which is only responsible for displaying the full name of a User, and we don't want it to rebuild every time the score changes, we will use the select method of the StateRef to watch only a sub part of the state:

It can be useful to be able to override the initial state of StateRef or the factory of LogicRef in some conditions:

Reusing a reference under a different scope.

Let's say we want to create an app where a user can create counters and see the sum of all counters:

We could do this by having a global state being a list of integers, and a business logic component for adding counters and increment them:

We can then use the select extension method in a widget to watch the sum of this list:

Now, for creating the counter view, we can have an index parameter in the constructor of this view.
This has some drawbacks:

A better approach would be to create a BinderScope above each counter widget. We would then configure this BinderScope to override the state of a StateRef for its descendants, with a different initial value.

The BinderScope constructor has an overrides parameter which can be supplied from an overrideWith method on StateRef and LogicRef instances.

Note: The whole code for the above snippets is available in the [example][example_main_overrides] file.

Let's say you have an api client in your app:

If you want to provide a mock instead, while testing, you can do:

Whenever the apiClientRef is used in your app, the MockApiClient instance will be used instead of the real one.

You may encounter a situation where different widgets are interested in a derived state which is computed from different sates. In this situation it can be helpful to have a way to define this derived state globally, so that you don't have to copy/paste this logic across your widgets.
Binder comes with a Computed class to help you with that use case.

Let's say you have a list of products referenced by productsRef, each product has a price, and you can filter these products according to a price range (referenced by minPriceRef and maxPriceRef).

You could then define the following Computed instance:

Like StateRef you wan watch a Computed in the build method of a widget:

Note: The whole code for the above snippets is available in the [example][example_main_computed] file.

You may want to observe when the state changed and do some action accordingly (for example, logging state changes).
To do so, you'll need to implement the StateObserver interface (or use a DelegatingStateObserver) and provide an instance to the observers parameter of the BinderScope constructor.

Then, in a business logic, stored below the MementoScope, you will be able to call undo/redo methods.

Note: You will get an AssertionError at runtime if you don't provide a MementoScope above the business logic calling undo/redo.

In some situation, you'll want to do some action before the BinderScope hosting a business logic component, is disposed. To have the chance to do this, your logic will need to implement the Disposable interface.

If you want to navigate to another screen or show a dialog when a state change, you can use the StateListener widget.

In the above snippet, each time the state referenced by authenticationResultRef changes, the onStateChanged callback is fired. In this callback we simply verify the type of the state to determine whether we have to show an alert dialog or not.

Binder wants to simplify the debugging of your app. By using the DartDev tools, you will be able to inspect the current states hosted by any BinderScope.